Get the Most from your Perennials 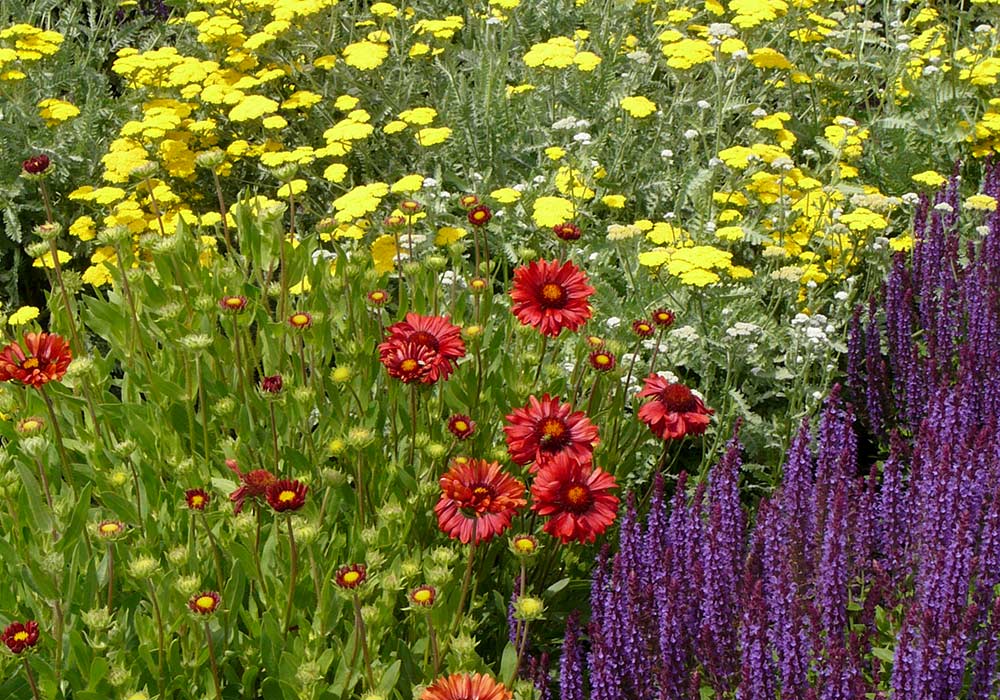 Gaillardia ‘Burgundy’, Salvia ‘East Friesland’, and Achillea ’Moonshine’ will all repeat bloom if deadheaded. Photo and post by Gwen Steele, co-founder of OXA

With the unusually wet, cool spring, plants have flourished and bloomed abundantly.

The abrupt change to hot summer weather can be hard on them. Flowers will fade more quickly.
Now is a good time to do a midseason, major garden clean-up. After this, there will just be some dead-heading and weeding a few times until fall clean-up after frost.

When your soil is wet (if it is anything other than fast-draining sandy soil) try to minimize stepping on it to avoid compaction. 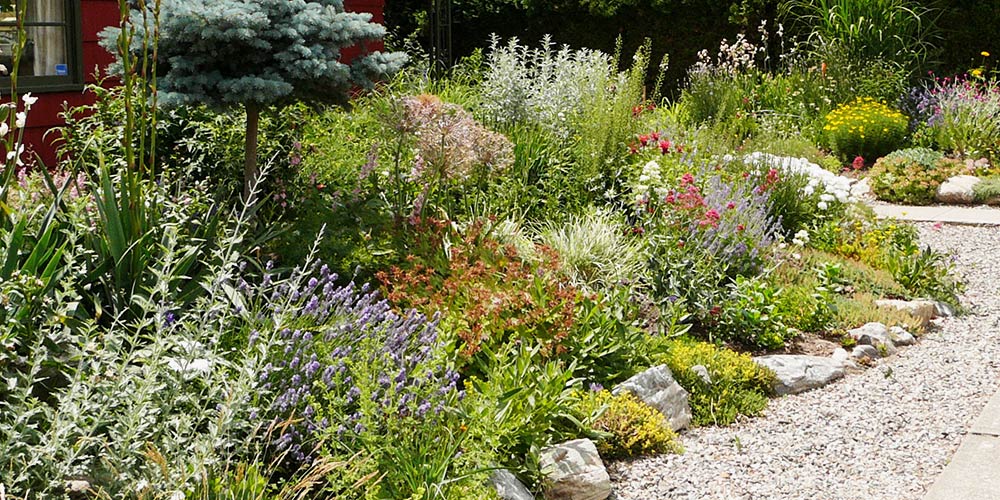 All compact early bloomers such as Armeria (thrift) and Dianthus ‘Tiny Rubies’ can have the dead flowers sheared off down to the foliage.

Larger plants whose foliage becomes messy after bloom, such as oriental poppies and Geranium ‘Johnson’s Blue’, can be cut back to the new growth.

Deadhead German Iris. These tough, drought-tolerant plants can be divided almost anytime. After dividing, cut back foliage to one half and leave the top of the rhizome exposed to the air.

Deadhead peonies down into the foliage.

Deadhead anything that tends to self-seed as soon as flowers finish – e.g. – blue fescue grass and Cerastium (snow-in-summer). This will avoid the extra work of removing unwanted seedlings. Cerastium clumps should also be reduced by half. Dig out roots all the way around the plant to keep them from invading other plants.

To encourage re-blooming, keep dead flowers cut off repeat bloomers such as Achillea (yarrow), Salvia, Rudbeckia, Echinacea, Coreopsis, and Gaillardia.
Cut above the next bud or if there are no more buds cut the stem below surrounding foliage to avoid creating a ‘porcupine’ look of cut stems.

Lamium can be sheared back to new growth to promote a summer flush of new foliage and blooms and to reduce seeding.

When a whole plant is being cut back or dead-headed, long-bladed shears are very efficient. Grape pruners are very effective for cutting individual stems. They are small and fit well in the hand. They work like scissors but have a spring to open the blades, saving half the handwork.

Having a tool caddy of some kind to carry hand tools plus water bottle, garden notebook, and camera saves searching for them when working.

This is the time to do a thorough weeding. An ergonomic trowel and a dandelion digger are good hand weeding tools.

Once the flush of weed growth from the cool, wet spring has been removed, weed growth is greatly reduced in areas that are not irrigated or are infrequently watered.

A good layer of mulch in all your garden beds will hold moisture, feed your plants as it breaks down, and minimize weed growth. If you are going to add mulch now, be sure to thoroughly weed first and then soak the soil before adding mulch.

As the gardening season evolves, remember to take photos and make notes of any changes you want to make. It is easier now, to see what will need dividing or moving than it will be in spring.

Also, take notes of plants you see in other gardens that you want to add to yours. 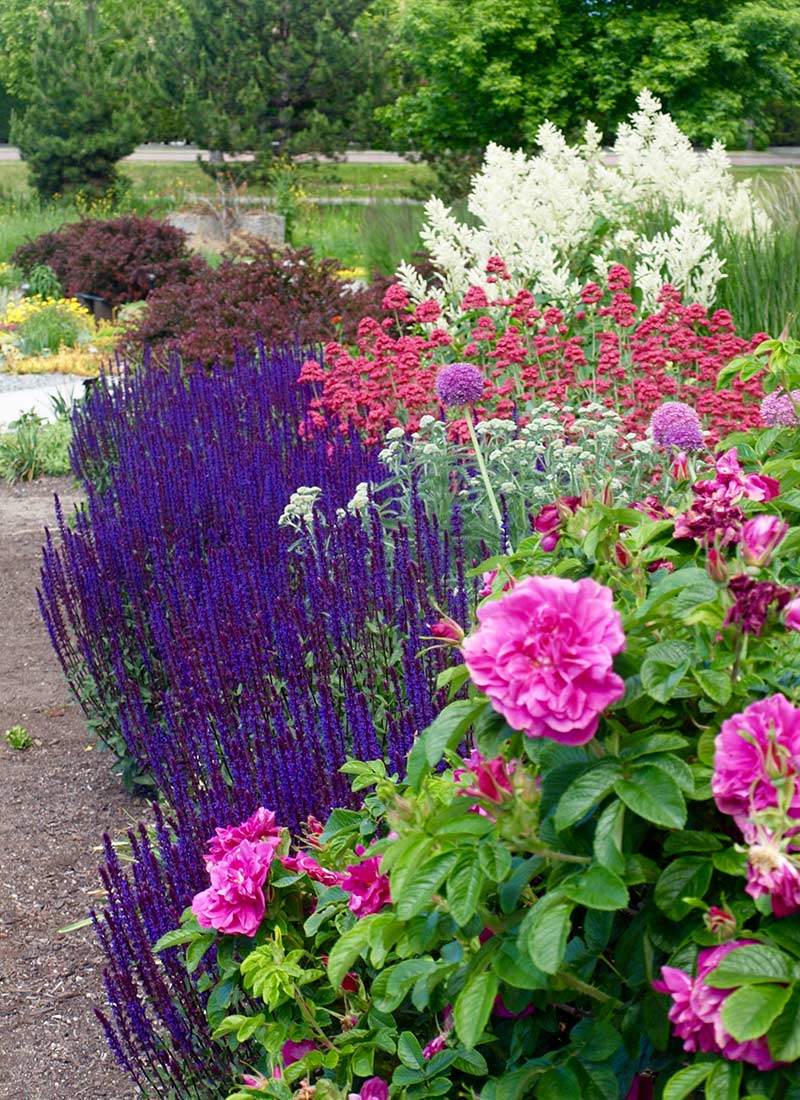 An excellent reference for getting the maximum performance from your plants is “The Well-Tended Perennial Garden” by Tracy DiSabato-Aust.

As a group blog and forum, we really appreciate your contributions and comments and hope to create a blossoming community of xeriscape gardeners well as a valuable archive of articles.

END_OF_DOCUMENT_TOKEN_TO_BE_REPLACED 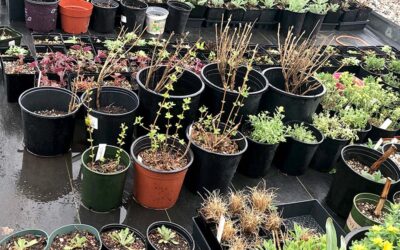 Article by Gwen Steele– The following is information I put together years ago for my nursery customers and now use for my classes. With the hot, dry springs we have these days, it’s more important than ever to follow good planting procedures to ensure success. If you...